This dance event gathers international dance artists such as Salsa, Semba, Bachata, Pachanga and Kizomba, are dances that originate from communities with African and Latin backgrounds.

Part of the attraction of this genre of dance, aside from the fast-paced fun and fitness aspects, are the flexibility and diversity: These are dances that can be danced alone, as a couple, or even in a group.

This event becomes a fun attraction for locals and visitors alike who need a day to let loose and maybe learn a dance or two in the process.

The fourth edition of the Kuching Heritage Race date has been set to February 16.

The race aims to introduce locals and visitors alike to Kuching’s rich heritage by providing a novel means to discover and understand the history of the city and its people.

More than just a fun event, the proceeds from race will be donated to deserving local charities, with proceedings from 2018 going to the House of Joy and Pusat Pemulihan Dalam Komuniti, Petra Jaya, each received a cheque for RM20,000 to assist in their work with disabled and disadvantaged persons in their communities.

Last year, 300 eager participants joined the race with the theme “Culture meets nature,” with the race route centred around the Reservoir and Museum Parks.

For more updates on the dates and application, visit the website here. 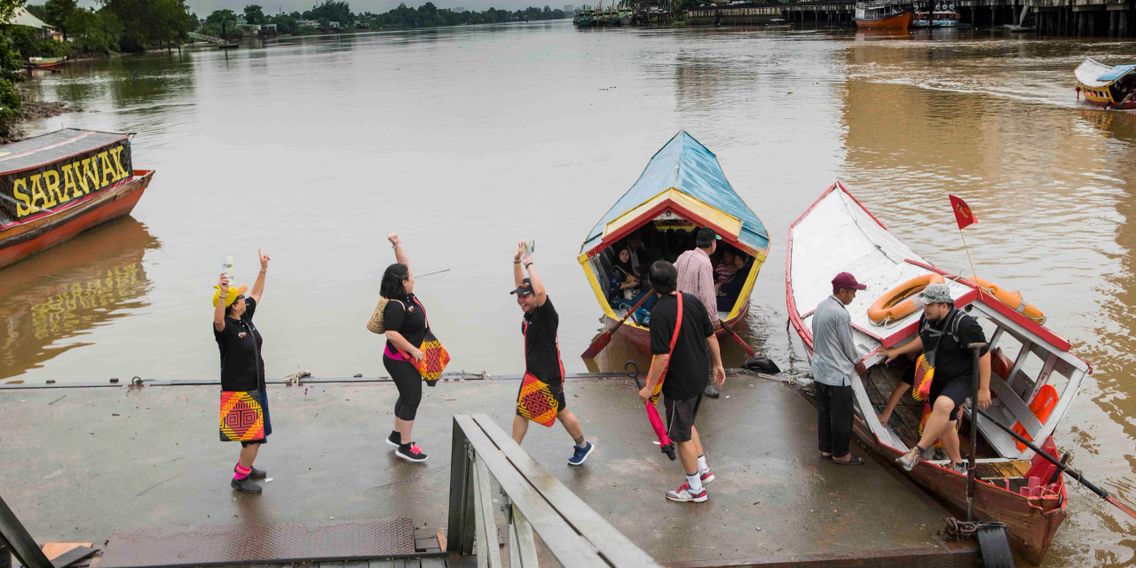 Sarawak Tourism Board will participate in various trade & consumer fairs in its focus markets in 2019.

More importantly, Sarawak will be holding their own trade or roadshows in certain markets such as the Sarawak Expo, a consumer fair, which will be held in November in Indonesia.

In Singapore, a two-part “Singapore Business Networking Session” will take place in April and October to encourage new business connections between Sarawak and Singapore industry partners.

STB will also be holding a Sarawak Tourism Roadshow in Melbourne, Sydney and Brisbane, with a B2B format, for the same reason.

A two-part Sarawak Tourism Seminar in collaboration with AirAsia will be taking place in South China as well, the first session taking place in March and the second in October.

STB encourages international trade partners to attend the various trade and consumer fairs and roadshows in the year of 2019, to form new business ventures to promote Sarawak’s attractions and products worldwide.

For more in depth information on the 2019 marketing initiatives here…

Sarawak Tourism Board will be implementing a large scale LED advertising campaign in some of Kuala Lumpur’s most frequented spots. 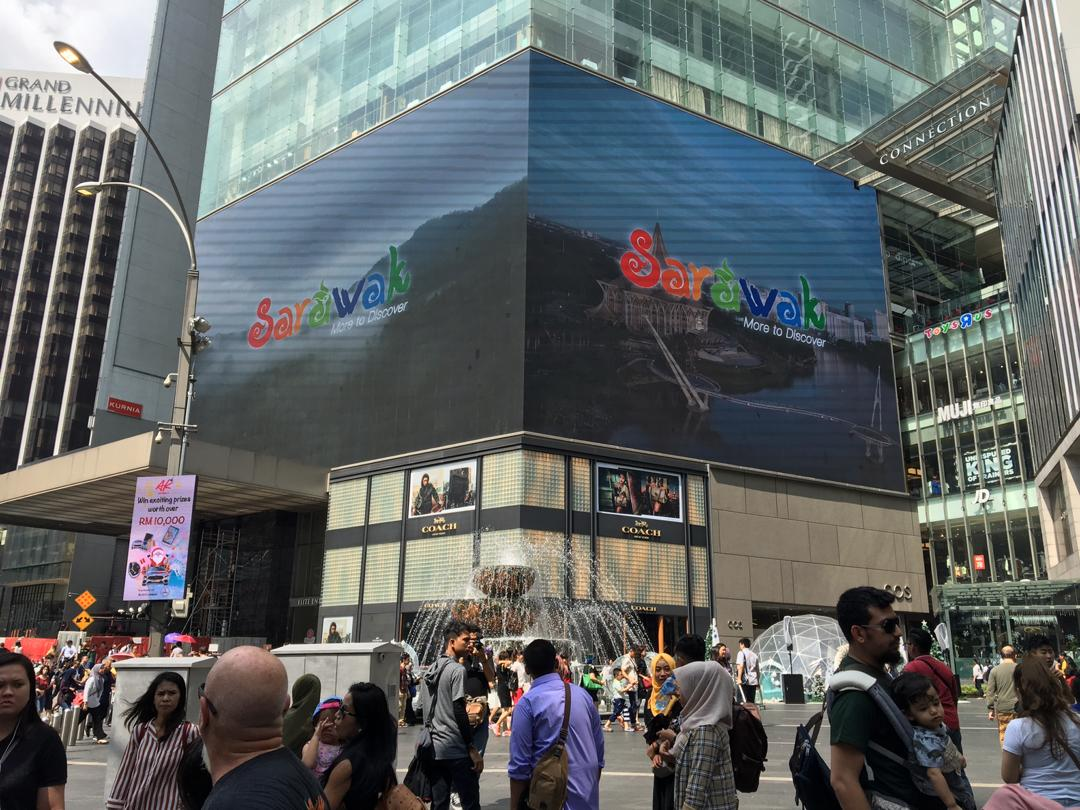 The “Sarawak, More to Discover” theme song is a local Sarawak production, through and through and was launched on New Year’s Day during the momentous New Year Countdown at Kuching Waterfront.

The theme song is sung by Sarawak-born international artiste, Dayang Nurfaizah, her strong voice translating the welcoming nature and warmth of Sarawakians.

The song itself has a feel-good tune, with catchy and ‘sing-able’ lyrics which allow Sarawakians and visitors alike to sing along with it, while the music composition celebrates  Sarawak’s musical heritage by combining the sape’ with Bidayuh, Iban and Malay music elements.

The song is composed by Bryan Chia with lyrics written by Steffany Raymond Landong and Farouk Kamil with Sape played by Howard Deri Anak Neilson Ilan and produced locally  by the AOK Records in Kuching.

Carpenter Street will come alive with activities, colourful processions and cultural performances on January 9th during the Hiang Tiang Siang Ti Temple Procession, which takes place every year on the fourth day of the twelfth month in the lunar calendar.

Attracting thousands of people, visitors and locals gather along the streets to witness the spectacle of talented lion and dragon dance troupes, performing their dances to the beat of the drums and gongs.

Beautifully dressed ‘maidens’, singers and dancers in colourful Chinese costumes. They will perform on beautifully decorated floats and the party goes on well into the night, truly a sight to behold in one of Kuching’s oldest streets.

On New Year’s Eve, Kuching Waterfront will be the location for the New Year Countdown for Kuching as well as the Visit Sarawak Campaign launch.

Fireworks and a beautiful display at the waterfront’s musical fountain will take place during the launch.

A new electric bus was unveiled at Borneo Convention Centre Kuching (BCCK) as a part of a pilot project that will introduce electric buses into the streets of Kuching.

Beginning early next year, the bus will take a 14km long route covering Satok, the Heritage Trail and iCOM Square, offering free rides to all locals and visitors for the first three months.

The bus has a capacity of 53 passengers and is wheelchair-friendly, with amenities like free Wi-Fi and a GPS tracking system.

It is fully electric and operates a range of around 300km on a fully charged battery, with a charging station located at Jalan Depo.

Sarawak Tourism Board recently held industry engagement sessions and a media night in Miri and Sibu, touching base and showing gratitude to media partners in the two cities.

On December 11 and 12 respectively, the syndication with industry partners was also held in Miri was held to present the Board’s plans for the coming Visit Sarawak Campaign and to take in feedback to be implemented in the future.

The Miri Media Appreciation Night was held to show the board’s gratitude to the local media in how they promote the communities, cultures and events within their region. The night was filled with lucky draws, karaoke and a photo booth for the members of the media to enjoy.

Sarawak Tourism Board (STB) will be holding a ‘Visit Sarawak Campaign’ logo launch in will Shenzhen on December 19 at the JW Marriott Shenzhen, China.

The launching ceremony will be attended by Assistant Minister of Tourism, Arts and Culture, Datuk Lee Kim Shin, representatives of the Consul General of Malaysia in Guangzhou, Beh Ching Chye and the Director of Tourism Malaysia Guangzhou, Sharon Ho.

During the launch, the campaigns’ colourful logo, tagline of “More to Discover” as well as the campaign promotional video will be presented and shared.

This will be the fourth launch held by STB, the previous launches taking place in Kuala Lumpur, Singapore and London.