For 2020, the 4th edition of Sarawak Adventure Challenge continues as a one-day multi-sport adventure race showcasing some of the best rainforests, rivers, trails and this year, one of the most beautiful caves in Western Borneo.

The challenge will be held on October 10, 2020 at Silabur Cave, Lobang Batu, Serian, about 88km from Kuching. This year’s theme is ‘The Jade Cave’, once again combining the excitement and demands of XC MTB and trail running with a spectacular cave. The race will start and finish at SMK Lobang Batu, which also highlights spectacular sceneries of the Tebakang area.

In response to requests for more variety on the format, the SAC 2020 has expanded to 14 race categories, including new categories for Sprint Duathlon, Sprint MTB and Veteran categories. Due to time constraints, there will be no early bird pricing this year and the registration cut off date is on September 13, 2020.

For more information about the event and how to register, visit https://sarawaktourism.com/event/sarawak-adventure-challenge/

Each tour operator can select ONE (1) category not exceeding RM5,000 per tour operator. These categories are:

The application is subjected to a first come first serve basis. The spaces are limited and currently, 75% of the applications have been taken up. Therefore, act now and don’t miss this opportunity!

The duration for application is from July 1 to December 31, 2020. To apply, visit https://sarawaktourism.com/stb-incentives/

The campaign signifies the State’s effort to revitalise the Sarawak tourism sector, which is greatly affected by the COVID-19 pandemic.

The Minister of Tourism, Arts and Culture Sarawak, Datuk Abdul Karim Rahman Hamzah said that the campaign would not only benefit industry players, including tour and park guides and operators, but also Sarawak residents who wished to enjoy the various destinations offered by the State.

The campaign will also open up more employment opportunities for industry players in the tourism and hospitality sectors who had lost their jobs due to the prolonged Movement Control Order (MCO).

For further information about the packages offered, visit https://sarawak.travel/explore-all and for bookings, log on to https://siasitoksarawak.rezgo.com/.

When we talk about a foodie’s experience in Mukah, it is impossible not to mention its wide range of authentic delicacies. This includes its famous marinated raw seafood dish, ‘umai’ and ‘linut’, a starchy paste made from sago flour which is usually served together with ‘sambal belacan’, a spicy chilli condiment mix with shrimp paste.

Mukah, which is one of the major sago producers in Malaysia, has for decades exported its sago to the outside world. Those famous ‘boba’ in Taiwanese milk tea drinks favoured by urban teens? They are made from sago!

In this episode, follow Bianca and Nadja on their journey into Mukah, the Melanau Heartland, to discover more about sago and how it is made into a variety of Melanau’s famous dishes, especially the ‘linut’ and those chewy goodness in bubble tea drinks.

The 16th Borneo International Kite Festival which is scheduled to be held from September 30 to October 4, 2020 in Bintulu has been postponed to a later date.

Borneo International Kite Festival (BIKF) Chairman, Datuk Talip Zulpilip said at a press conference that BIKF involves mostly kite flyers from foreign countries with thousands of attendees expected at one time. Hence, it would be difficult to observe the social distancing rule among participants.

Meanwhile the 12th Sibu International BASE Jumping, initially held on September 18 to 27, 2020 in Sibu has been cancelled. It was announced by Sibu Resident, Charles Siaw on August 6, 2020. Other major events cancelled in Sibu are the Borneo Cultural Festival, Selangau Festival and Sibujaya Festival.

To know more about the events, visit Sarawak Tourism Board Official Website at  https://sarawaktourism.com/

KUCHING – The Minister of Tourism, Arts and Culture Sarawak, Datuk Abdul Karim Rahman Hamzah launched the Journal of Responsible Tourism Management (JRTM) on August 10, 2020. The journal aims to promote Sarawak and inform readers about how responsible tourism can be applied in local contexts. It is the first international journal in Tourism and Hospitality published in Sarawak and edited by Sarawakians.

JRTM consists of advance and cutting-edge knowledge about responsible tourism and hospitality based on the issues and cases in Sarawak, and any developing destinations locally or internationally. It serves as an avenue to converge the expertise of tourism and hospitality academicians, practitioners, government agencies and other stakeholders, which benefit readers and the communities by providing holistic views, robust findings and practical insights.

The Minister said that his ministry encouraged tourism and hospitality players or stakeholders to look at the journal as a reference to develop responsible tourism and become an exemplary collaboration between government, university, practitioners and the community to make a positive and long-lasting impact to the society.

The journal is published by the Faculty of Hospitality and Tourism Management from UCSI University and the Sarawak Research Society (SRS), supported by the Ministry of Tourism, Arts and Culture Sarawak and the Regional Centre of Expertise (RCE) Kuching.

The inaugural issue of JRTM will be published in January 2021 in both electronic and printed forms. It will be published twice a year and is now calling for paper submissions for its first issue. For more information, visit https://jrtm.org/

Sarawak Tourism Board (STB) welcomed its newly appointed Chairman, Telang Usan assemblyman YB Dennis Ngau and members of the Board at a Welcome Dinner on August 5, 2020 at the Imperial Hotel, Kuching.

YB Ngau, who is well-versed in the hospitality and tourism industry, takes over from Datuk Abdul Wahab Aziz, who has been an exemplary leader.

The new appointed members of the Board are Datu Antonio Kahti Galis, the Permanent Secretary of the Ministry of Local Government and Housing Sarawak and Tuan Haji Mohamad Taufik Abdul Ghani, the Executive Chairman of Kiasan Engineering Sdn Bhd.

For the complete list of STB Board members, visit https://sarawaktourism.com/about-sarawak-tourism-board/

Starting July 29, 2020, all travellers entering Sarawak will only need to fill the enterSarawak & e-HDF Form.

The unified enterSarawak & e-HDF Form aims to provide travellers with one seamless experience, and to ensure a pleasant journey into Sarawak.

The integrated form can be found on the Sarawak Disaster Management Committee website at sdmc.sarawak.gov.my.

This form is also to be filled by those travelling by air within Sarawak.

For those whom have applied before July 29, 2020, the application will still be processed under the current system.

Let us continue to be COVID aware, and to travel safely and responsibly. 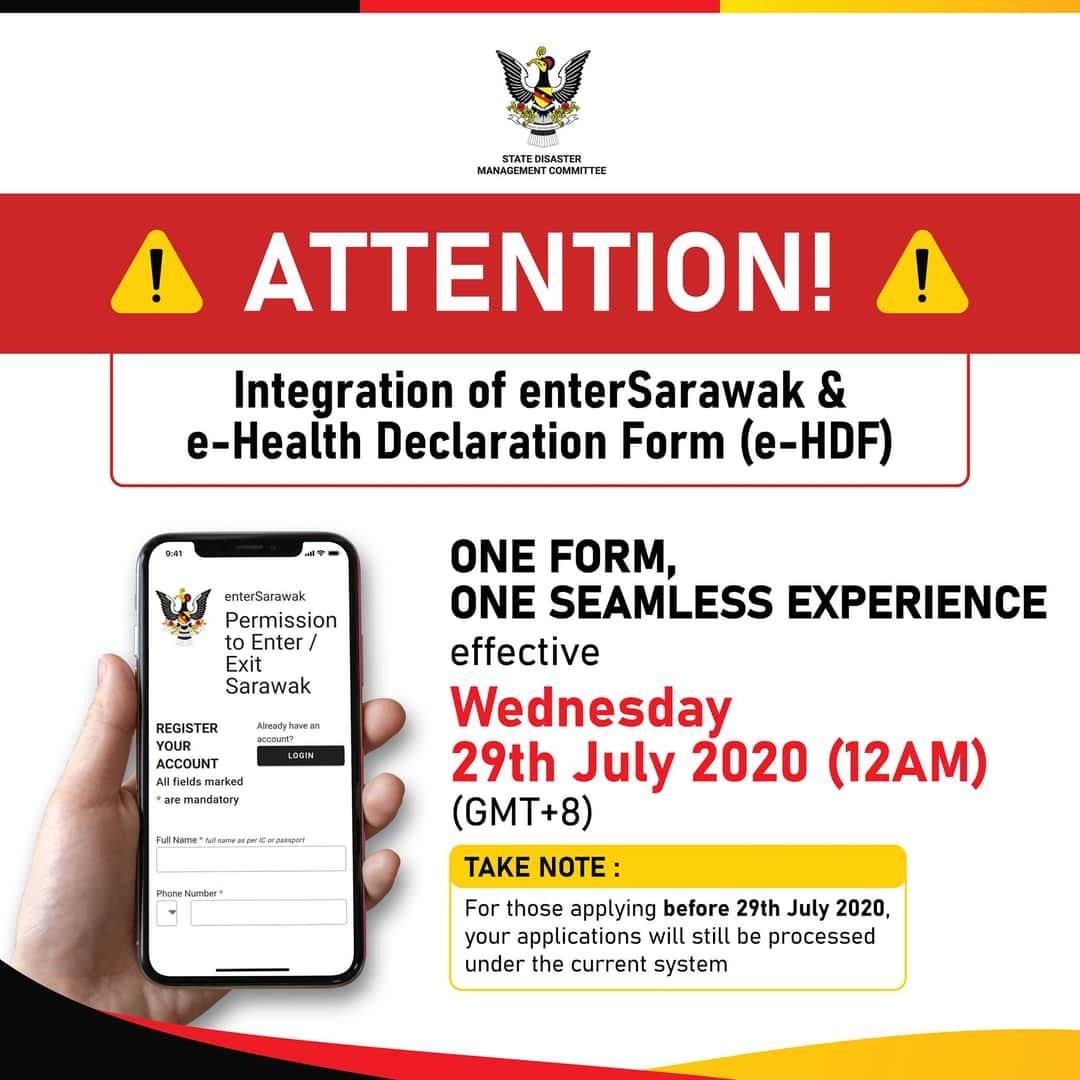 STB Chief Executive Officer, Sharzede Datu Haji Salleh Askor who was invited as one of the speakers, representing Sarawak, shared various aspects of Responsible Tourism and Sarawak’s efforts in implementing Responsible Tourism, especially when hosting internationally renowned events such as the Rainforest World Music Festival (RWMF). She also shared on how Responsible Tourism has benefitted the State’s economic viability, the environment and empowering community (3Es), as well as its importance in the recovery of tourism post COVID-19.

The session was moderated by Associate Professor Ida Ingko, from the Department of Tourism and Commerce, UCSI University Sarawak. 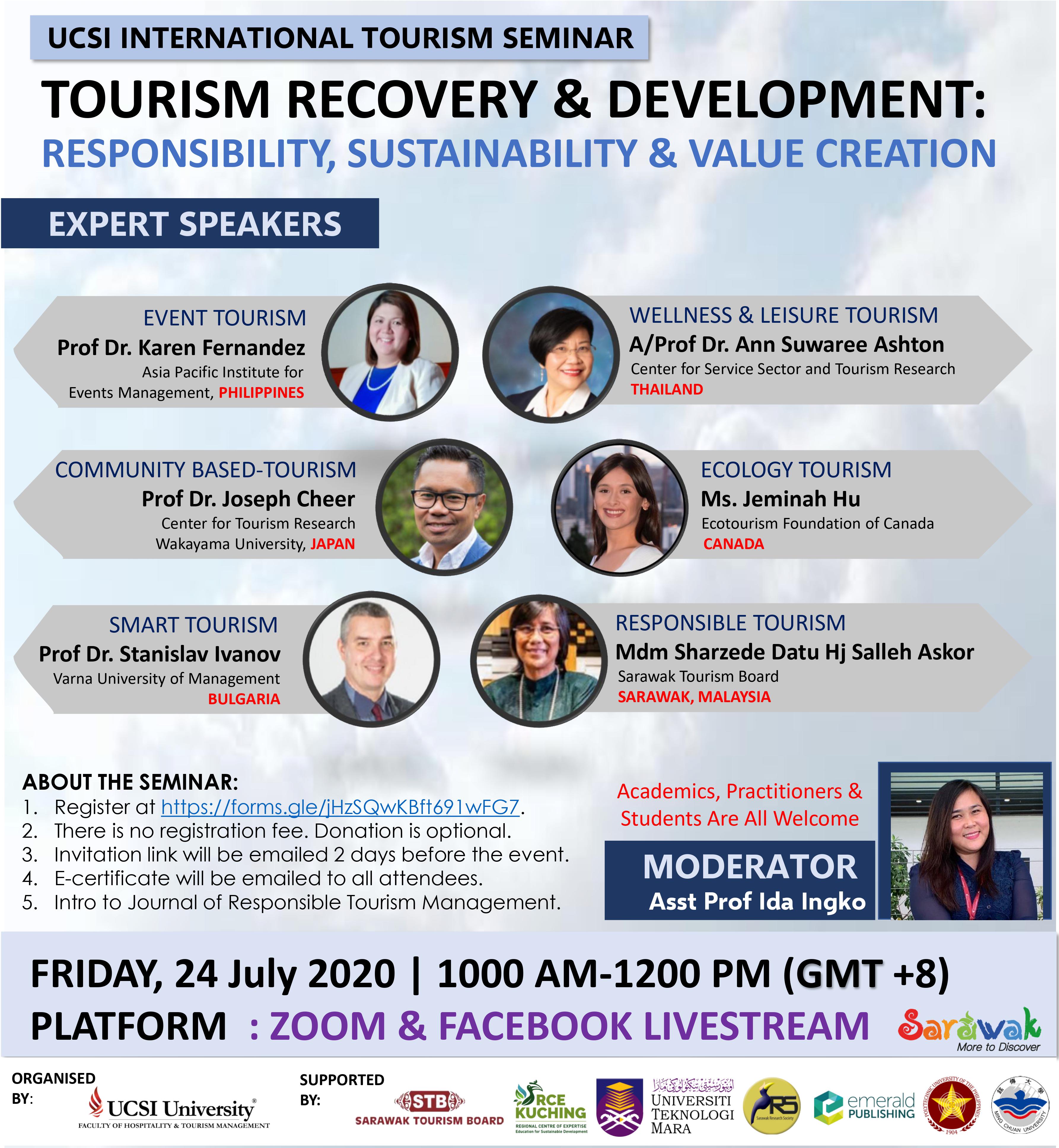 KUCHING – A 120-year-old 1.5-metre long ornamental wooden oar is the latest addition to the Brooke Gallery at Fort Margherita.

Brooke Museum’s manager, Salliza Sideni said that the oar, with carved Dayak motifs which was believed to have been given to Anthony Walter Dayrell Brooke, the last Rajah Muda of Sarawak, sometime in the 1920s when he was travelling upriver.

It is also said that the oar had been kept in Britain for many years before it was returned to Sarawak by the Brooke Museum Director, Jason Brooke during his trip back to the city.

“From the looks of it, the oar is believed to be made from Beluan wood, a quality wood which is only found in Borneo Island. We are delighted that this artefact had survived for a long time and we are now able to display it at the Brooke Gallery for Sarawakians and visitors to see”, she added.

This year, the iconic Kuching landmark Fort Margherita celebrates its 140th Anniversary with the reopening of The Brooke Gallery on July 13.