Located about 48km from Bintulu, Sebauh is a small town with over 20,000 residents. Seated on an island directly opposite Sebauh is the floating Natok Kon Sebauh Temple.

Locals believed that the temple houses three deities that possess immense powers and will come to aid anyone in need. To get there, one must take a boat from the jetty. Upon arrival, you will notice that the temple is completely separated from land, surrounded by water. There are many legends on how the temple came along. The Chinese have their own version while the Ibans have theirs.

According to the local Chinese community, the legend involves three fishermen on board looking for wild ferns across the river before their boat was struck by a storm, flipped over and disappeared at the scene. A huge rock that resembles a boat then appeared at the spot where the boat sank. Apparently, when the moon is high, three figures in white robes can be seen lurking on the island.

A slightly light-hearted version involves three Malay fishermen; Haji Salleh, Tuanku Silai and Mohammad Su who were fishing at Kuala Sebauh a month before the Lunar New Year.  While having lunch on their boat, two fishes suddenly jumped up from the river and landed on Haji Salleh’s plate which made his friends laugh out loud. Then, a lizard from the roof of their boat dropped on to his plate, making them laugh even louder. They laughed so hard that the boat sank. Half a year later, an island appeared at the very site the boat sank and the three figures can often be seen on the island when the moon is high.

Meanwhile, the Iban folklore tells that there were three Malay sailors on a boat from Kuala Bintulu to Sebauh. One day, the cook had made some sago porridge. Instead of eating it, they played with the porridge by stretching and stirring it around each other’s heads. Their foolishness angered the Almighty, turning them into stones. A powerful shaman came along and charmed the stone boat, moving it to the current site. A long time ago, the island resembled a boat however, over the years, erosion took its toll. 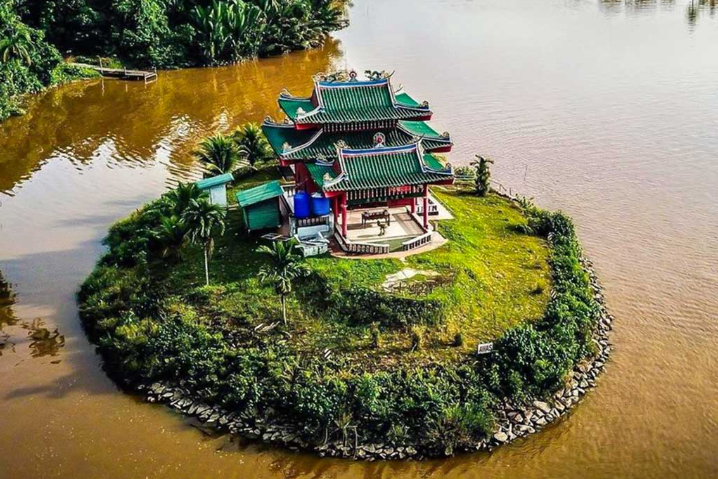