The Cruise ship Silver Muse, Monaco berthed on November 29 at the Senari port in Kuching. The cruise ship was on its 12-Day “Hong Kong – Singapore” route and stopped by Kuching as the final port before arriving in Singapore.

The disembarking passengers were greeted with a traditional welcoming and garlanding by a cultural at the courtesy of the Sarawak Tourism Board.

The highest number of passengers came from United Kingdom with 97 passengers, the United States with 91 people and Australia with 76.

Excursion trips available to the disembarking passengers include a Kuching City Tour, Semenggoh Nature Reserve and Annah Rais visit as well as a Sarawak Cultural Village tour, while others took a City Shuttle to explore Kuching on their own. 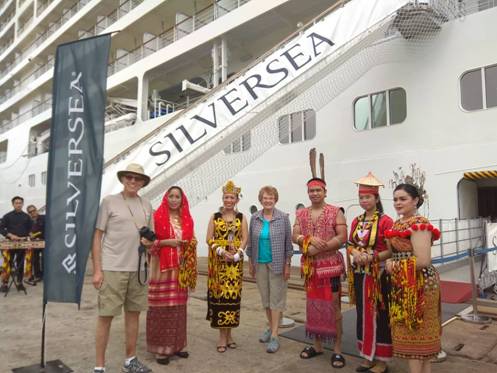